Within the era of Mesozoic we have several periods in which this is divided geological time. Today we are going to talk about Triassic. It is a division of the geological time scale of these three periods into which the Mesozoic is divided. It began approximately 251 million years ago and ended approximately 199 million years ago. These start and end dates are not exact but they are marked by important events from a geological and biological point of view. In this case we find the mass extinction of the Permian-triassic and that of the triassic-jurassic.

In this article we are going to focus on explaining all the characteristics, biology and climate of the Triassic. 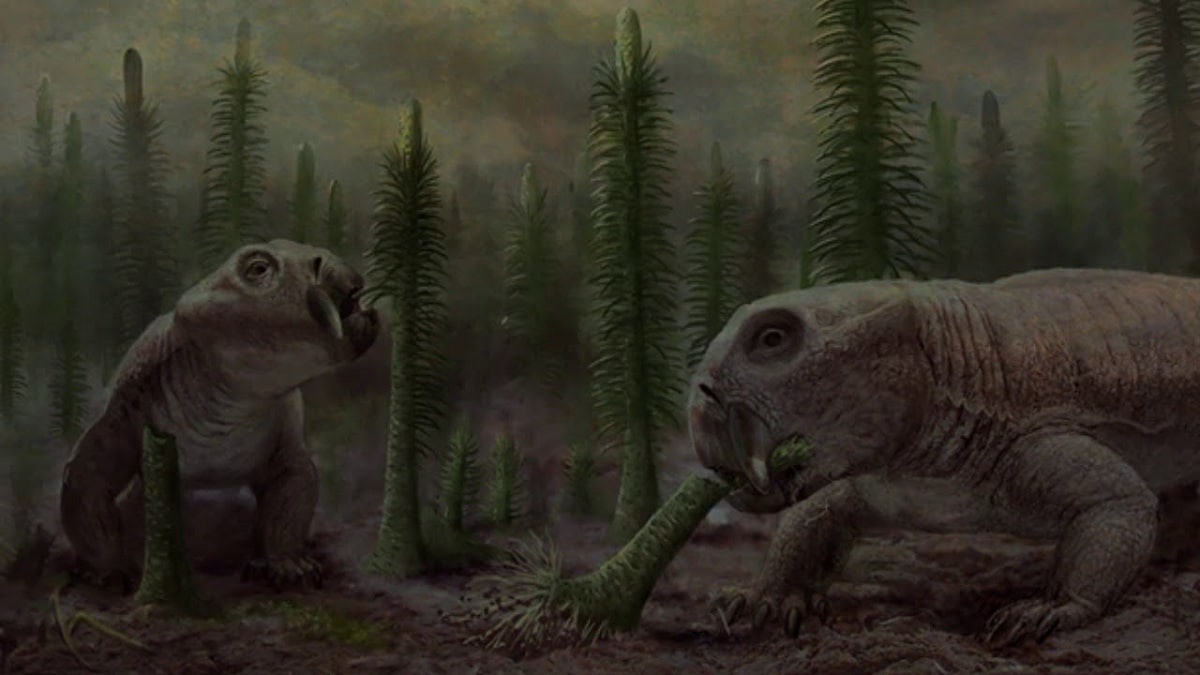 This period is mainly characterized by the appearance of the first dinosaurs. These animals were represented by bipedal forms, a fully carnivorous diet, and small size. However, by the end of the Triassic they had already acquired a large-scale diversification and yes they had become the dominant vertebrates on the entire planet. The extension of the dinosaurs came to the extinction of other groups of previous animals such as the most primitive archosaurs and many mammalian reptiles that had spread during this time.

During this period almost all the lands of our planet were concentrated in a single continent called Pangea. This continent had a C shape and to the east was the Tethys Ocean and surrounding it was the Panthalassa Ocean. This ocean is considered the universal ocean since it covered the entire planet.

During these times, there were numerous sediments in the deep ocean that were deposited during this period and that have disappeared through the subduction of the oceanic plates through the movement caused by the convection currents of the Earth's mantle. This is the reason why not much is known about the open ocean or during the Triassic.

The Pangea continent began its dislocation during this period especially during the late Triassic. And is that this period is It is divided into three epochs known as the Lower Triassic, Middle Triassic, and Upper Triassic. This is how the super continent was divided by Laurasia and Gondwana. The first part understand the entire Asian continent, North America and Europe. The second part of the supercontinent comprised Africa, Arabia, India, Australia, Antarctica, and South America.

The supercontinent was moving very slowly north during the Triassic. This is where the supercontinent began to show the first signs of fragmentation in the two main portions. The first sediments that could be found outside the sea were caused in the rift that was the cause of the first separation of the supercontinent. This rift is the one that caused the initial breakdown of Pangea and that was able to separate what today we know as New Jersey from Morocco.

During this period the sea level rose slightly although the volume of the emerged areas was still quite high. And it is that the Tethys ocean formed a wide gulf that was becoming a route of marine invasion.

The climate of this period was generally hot and dry. These high temperatures were the cause of the origin and extension of deserts and evaporites. Since Pangea was so large, the moderating effect of the ocean was greatly limited. And it is that the ocean acts as a moderator of global temperatures. Therefore, in inland areas we can experience larger sudden changes in temperature since there is no proximity to the sea that may be regulating the temperature thanks to the operation of ocean currents.

The continental climate was highly seasonal in this period with quite hot summers and very cold winters. Since the sea could not act as a thermal regulator, there were excessively extreme temperature ranges in both seasons of the year. There were probably strong monsoons in the Ecuador area, although there is no evidence of glaciation near or at any of the poles. In fact, in this period the Polar regions were apparently humid and with a temperate climate. This climate was perfect to be able to develop all the reptilian-like creatures whose blood is cold. 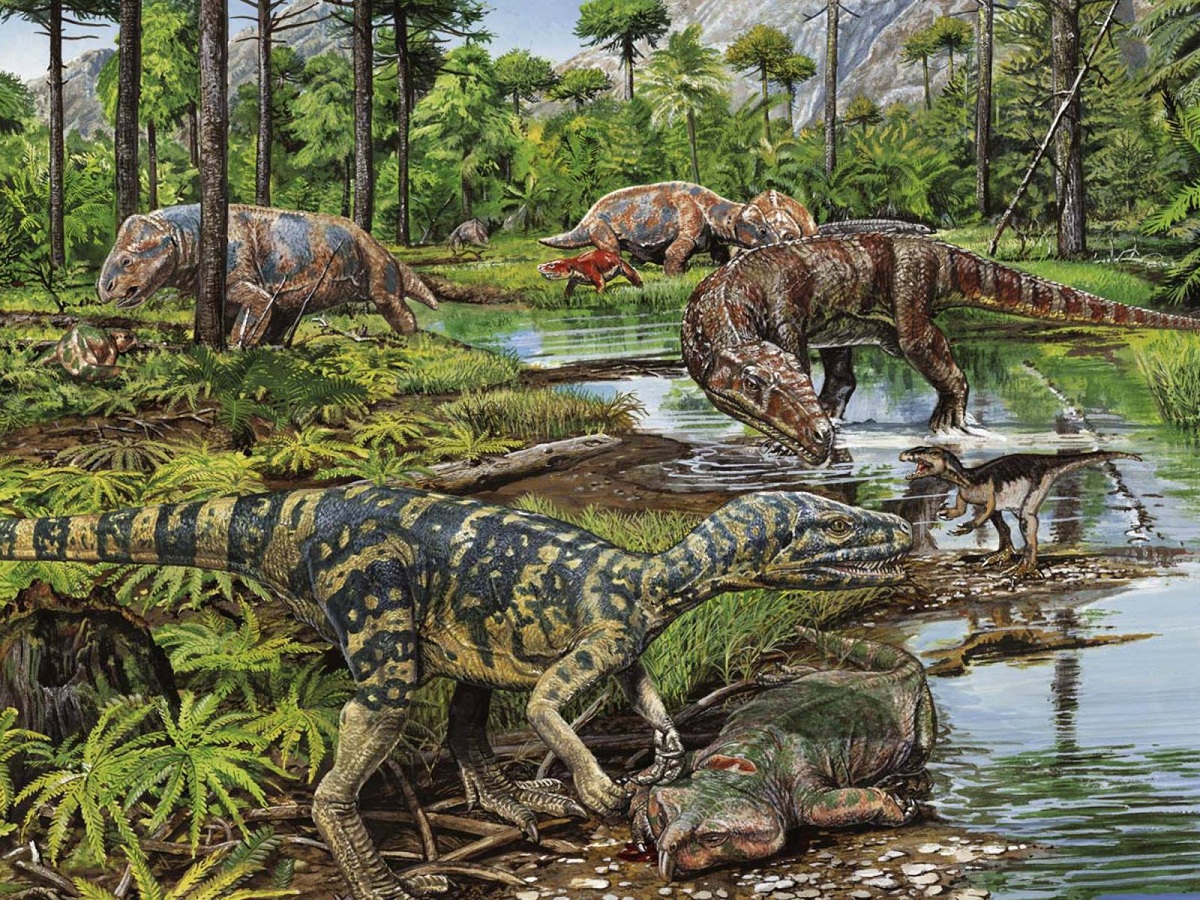 As we have mentioned before, the sea level rose slightly during the Lower Triassic. At the end of this period there was a mass extinction in which the conodonts and placodonts reptiles became extinct. In this extinction 20% of marine animals disappeared although all these groups could be recovered during the Jurassic period. Most of the victims that suffered extinction due to the spread of dinosaurs were the genera of mammalian reptiles and large amphibians.

As expected in nature, there are animals and plants that are primary beneficiaries of the extinction of other species, since all that can be natural predators. If they do not have natural predators, their populations can grow at a faster rate. These beneficiaries of extinction on earth were the rapidly expanding dinosaurs, especially during the Jurassic period, and dominated terrestrial habitats throughout the entire Mesozoic era.

The only reptiles that could survive the expansion of the dinosaurs were ichthyosaurs and plesiosaurs. Scientific evidence suggests that there were various extinction courses during the Triassic. One was at the beginning of the period and another at the end. The timing of these extinctions in the seas is not entirely clear to science but there are causes of Triassic extinctions that remain unknown.

One of the main studies conducted in northwestern Arizona in 2002 failed to show sudden changes in the environment or temperatures, so the possibility that the cause of the extinction was climatic is completely ruled out. In these times it was conifers and other groups of gymnosperms that replaced the flora of seed plants that had spread and predominated in lowland habitats during these periods.

I hope that with this information you can learn more about the Triassic period.