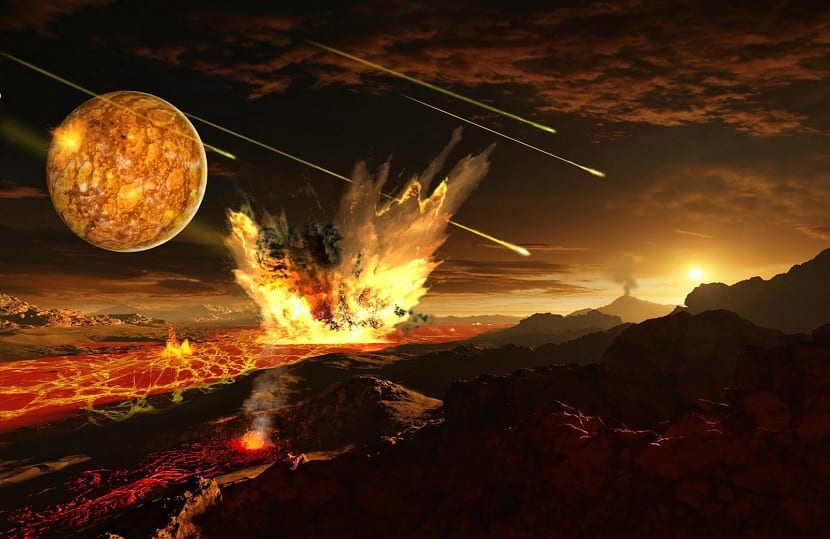 On numerous occasions you may have read in my posts the expression "Geological time". The scale we are used to working on cannot be used to talk about the geology and evolution of the Earth or the universe. Keep in mind that the human scale in which we normally work is about 100 years per individual. However, time does not mean anything to geological processes. That is where we have to talk about geologic time.

The study of the Earth needs to have a larger scale in which it can encompass all geological processes as they have occurred in reality. Therefore, today we are going to talk about geological time. Do you want to know how geologists date and date geological events on our planet? 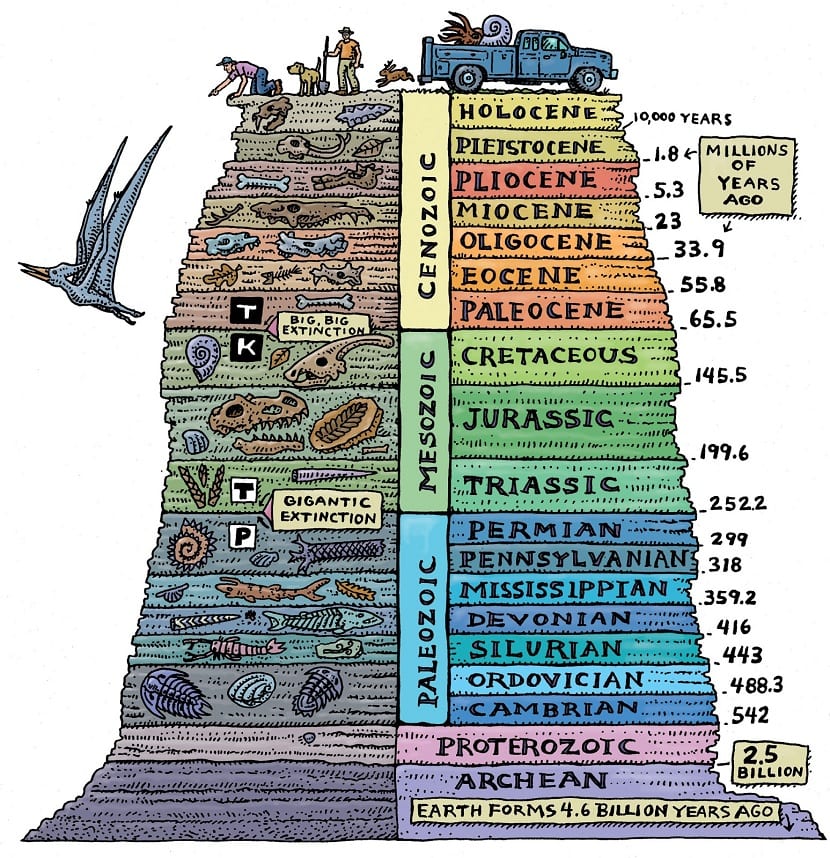 In order to compress all geological information we use this geological time. When we speak, for example, of the formation of sedimentary rocks, we speak of the compaction of materials by the force of pressure. This training does not happen in days, weeks, or months. It's more, It doesn't happen in 100 years. The process of formation of a sedimentary rock such as a sandstone takes thousands of years. Human beings are not even a small blink in the geological history of the Earth.

In order to introduce all geological processes on a scale that we can work on, we use the Aeons, Geological Ages, periods and epochs. Unlike the normal time with which we are used to working, geological time does not have a fixed duration. This is because there are stretches in Earth's history where more significant events occurred. These events are summarized in lmountain formation, erosion, mass extinctions, etc.

With all these characteristics and guidelines, we can define geological time as the period of time that spans from the formation and development of the Earth (about 4,5 billion years ago) to the present. In short, it is as if it were the Earth's calendar. 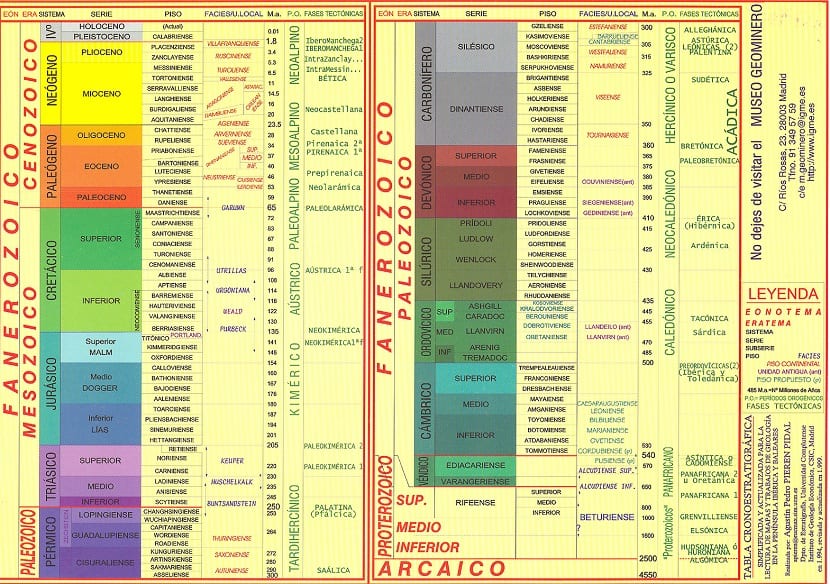 This time scale is widely used by geologists and other scientists. Thanks to her, They can assign time and dates to the most important events on Earth. Inside the rocks is where you will find more information about what has happened on our planet throughout these 4,5 billion years.

Until the XNUMXth century the Earth was thought to be only a few thousand years old. True terrestrial knowledge came with the discovery of radioactivity by Marie Curie in the XNUMXth century. Thanks to this, it has been possible to date the rocks of the earth's crust and the falling meteorites.

If we want to talk about geological time, we cannot use units of time such as decades or centuries. The most useful way is to divide the time by major geological events. In short, it is about the great changes suffered by rocks and living beings since the origin of our planet.

In geologic time, the largest unit of time used is the eon. This eon is divided into eras, periods, epochs, and stages. The entire history of the Earth is divided into two great Aeons of time. The first is the Precambrian, where the Earth formed about 4,5 billion years ago. It ended about 570 million years ago. We are now in the Phanerozoic Aeon. These two eons are too big, so we need smaller timescales.

We are going to study in depth each unit of measurement of geological time: 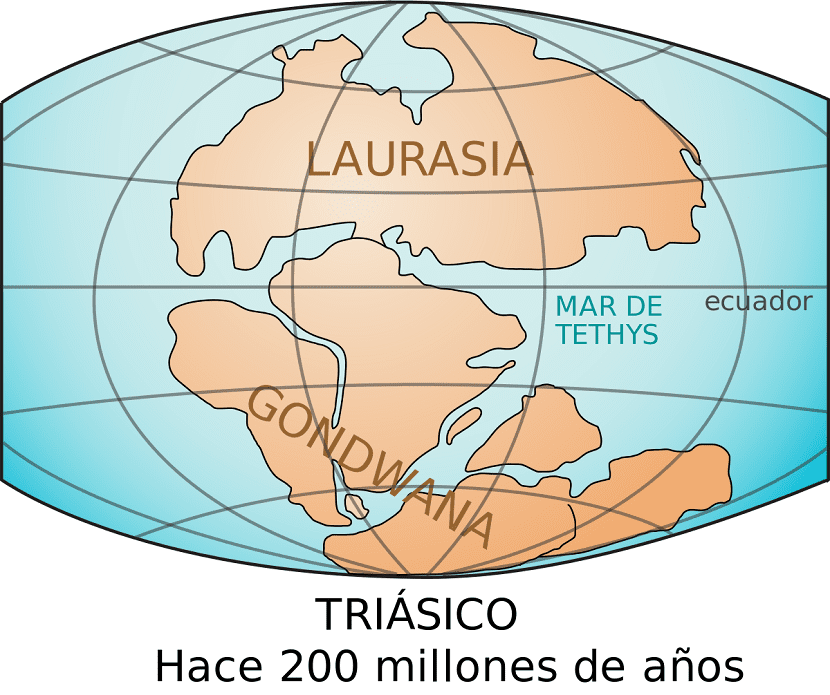 It is the greatest of all on the time scale. It is measured for every 1.000 billion years. The passage from the Precambrian to the Phanerozoic occurs due to the disintegration of the supercontinent called Pannotia. Phanerozoic means "visible life." There was already life before the beginning of this eon, but this is where they are more complex and evolved. 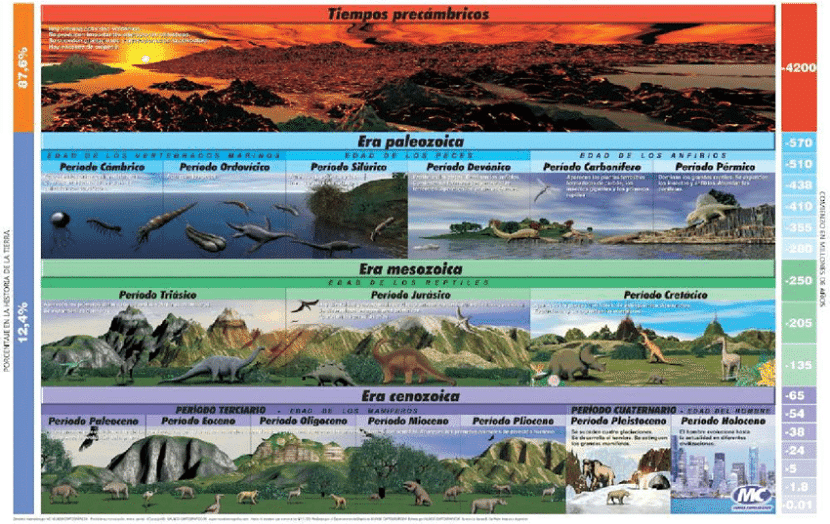 The era is not an exact unit. It groups together important geological or biological changes suffered by the planet since its formation. Each era begins with an important event. For example, the Mesozoic begins with the appearance of the first birds and mammals.

The ages of geologic time are: Azoic, Archaic, Proterozoic, Paleozoic (ancient life), Mesozoic (intermediate life), and Cenozoic (recent life). Since the eras are too large in time, the divisions need to be reduced for more accuracy.

It is about the subdivision of the eras. Each period marks a geological event or the appearance of a living being that serves as a mark. For example, in the Cambrian period the supercontinent called Pangea breaks up.

The epoch is the division of the period. In each epoch geological events are recorded on a smaller scale. For example, in the Paleocene there is the separation of Europe and North America. Although in many maps of geologic time the last epoch that is written is the Holocene, the Earth has already passed it. We are now situated in the Anthropocene. It is the first epoch defined by the action of man.

Large changes on a global scale such as climate change are caused by greenhouse gas emissions from our activities. As with the ozone layer, which has remained stable, we have managed to almost bring it down in just decades. We are talking about an exponential development that happened in just about 300 years. The world population in the year 1750 did not reach one billion inhabitants. However, today, we are more than 7,5 billion. It is expected that by the year 2050 we will be almost 10 billion.

As you can see, geological scales are very necessary to date fossils and to better understand the origin of our planet. And you, did you know about geological time?

Receive all the news about meteorology in your email.
bool (true)