Snow is what is called frozen water that has precipitated. It is nothing more than water in a solid state that falls directly from the clouds. Snowflakes are made up of ice crystals that, as they descend to the earth's surface, cover everything with a beautiful white blanket.

If you want to know how snow is formed, why it snows, the types of snow that exist and their cycle, keep reading 🙂 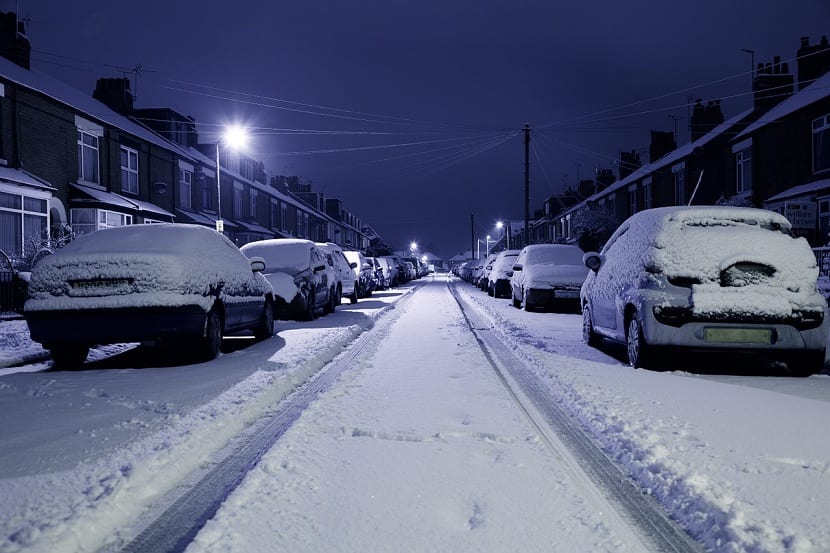 As the snow fell knows him as nevada. This phenomenon is frequent in many regions whose main characteristics lie in a low temperature (usually during the winter season). When snowfalls are abundant, they tend to damage city infrastructures and interrupt daily and industrial activities on many occasions.

The structure of the flakes it's fractal. Fractals are geometric shapes that are repeated at different scales, generating a very curious visual effect.

Many cities have snow as their main tourist attraction (for example, Sierra Nevada). Thanks to the heavy snowfalls in these places, you can practice different sports such as skiing or snowboarding. In addition, the snow offers dreamlike landscapes, capable of attracting many tourists and generating great profits.

We have talked about how snow is a strong tourist attraction and that it leaves beautiful landscapes in its wake. But how do these flakes form?

Snow are small crystals of frozen water that are formed in the upper part of the troposphere by absorption of water droplets. When these water droplets collide, they join each other to form snowflakes. When the flake has a weight greater than air resistance, it falls.

When snow falls on the ground, it builds up and builds up. As long as the ambient temperature stays below zero degrees, it will persist and continue to be stored. If the temperature rises, the flakes will start to melt. The temperature at which snowflakes form is usually -5 ° C. It can be formed with a little higher temperature, but it is more frequent from -5 ° C.

In general, people associate snow with extreme cold, when the truth is that most snowfall occurs when the ground has a temperature of 9 ° C or more. This is because a very important factor is not taken into account: ambient humidity. Humidity is the conditioning factor for the existence of snow in a place. If the weather is very dry, there will be no snowfall even if the temperatures are very low. An example of this is the Dry Valleys of Antarctica, where there is ice, but never snow.

There are times when the snow dries up. It is about those moments in which the flakes, formed with the humidity of the environment, pass through a mass of dry air that turns them into a kind of powder that does not stick anywhere and that is ideal for those snow sports.

The accumulated snow after a snowfall has different aspects depending on how the meteorological actions develop. If there are strong winds, melting snow, etc. 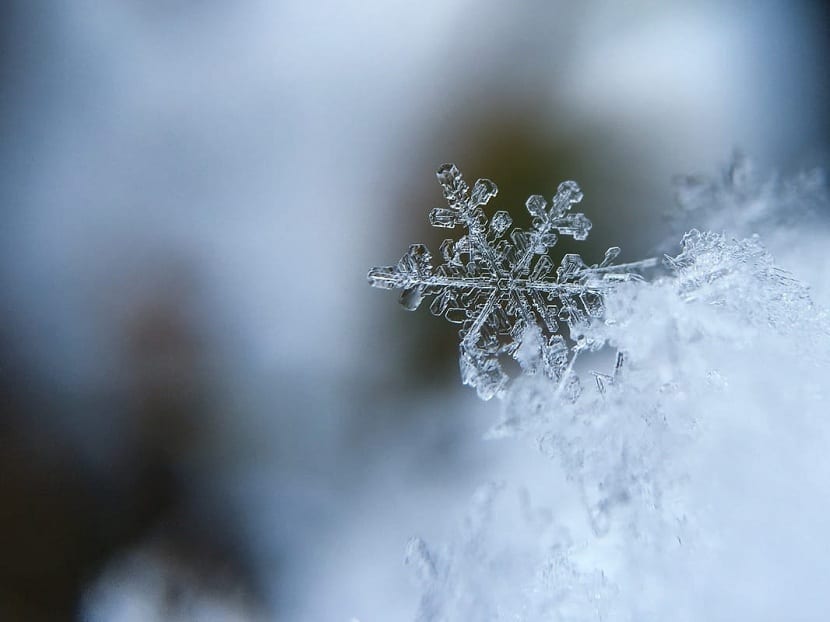 The flakes usually measure little more than one centimeter, although the sizes and compositions depend on the type of snow and the air temperature.

Ice crystals come in many forms: prisms, hexagonal plates or the familiar stars. This makes each snowflake unique, even though they all have six sides. The lower the temperature, the simpler the snowflake and the smaller in size.

There are different types of snow depending on the way it falls or is generated and the way it is stored.

The difference between this frost and the previous one is that this snow does give rise to definite crystalline shapes such as sword blades, scrolls and chalices. Its formation process is different from conventional frost. It is formed through a process of sublimation.

This type of snow is the most common known for be fluffy and light. It is the one that has lost cohesion due to the differences in temperature between the ends and centers of the crystal. This snow allows a good glide on the ski.

This snow is formed by the continuous cycle of thawing and refreezing suffered by areas where the temperature is low but there is sun. The snow has thick and rounded crystals.

This snow is more common in the spring. It has soft and moist layers that do not have much resistance. It can cause wet snow avalanches or plate avalanches. It is usually found in areas where precipitation is lower.

This type is formed when surface melt water refreezes and forms a firm layer. The conditions that give rise to the formation of this snow are the warm air, the superficial condensation of the water, the incidence of the sun and the rain.

Normally the layer that forms is thinner and breaks when the ski or boots pass over it. However, there are situations in which a thick, crusty layer when it rains and the water seeps through the snow and freezes. This scab is much more dangerous because of how slippery it is. This type of snow is more frequent in areas and times of rain.

The wind gives an effect of aging, breaking, compaction and consolidation of all the superficial layers of the snow. Consolidation works best when the wind brings more heat. Even though that heat brought by the wind is not enough to melt the snow, it is capable of hardening it by transformation. These wind plates that are formed can be broken if the lower layers are weak. This is when an avalanche forms.

This name is given to that thin layer of transparent ice found on many snowy surfaces. This ice produces a reflection when the sun shines. This layer is formed when the sun melts the surface snow and then it re-solidifies. This thin layer of ice creates a mini greenhouse in that it causes the lower layers to melt. 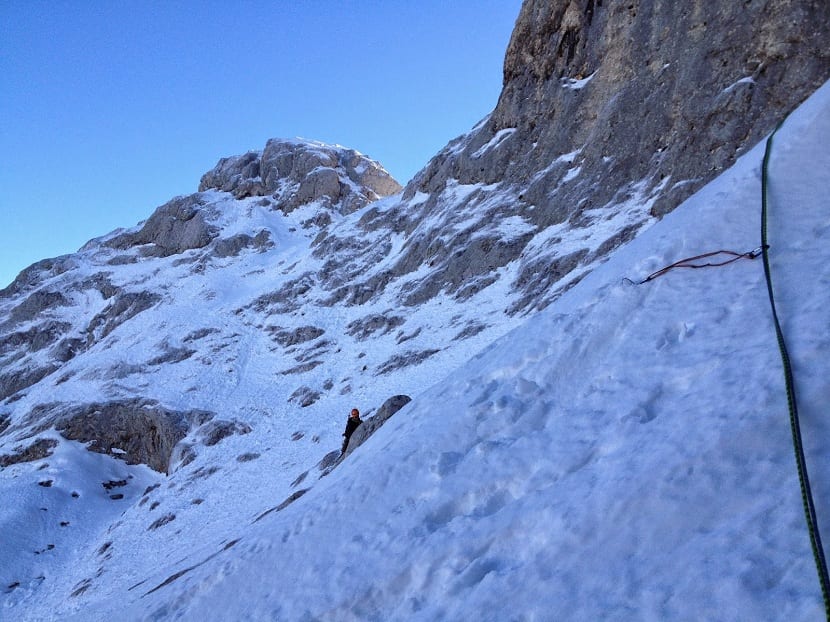 It is a thin layer of transparent ice that is produced when water freezes on top of a rock. The ice that forms is very slippery and makes an ascent very dangerous. 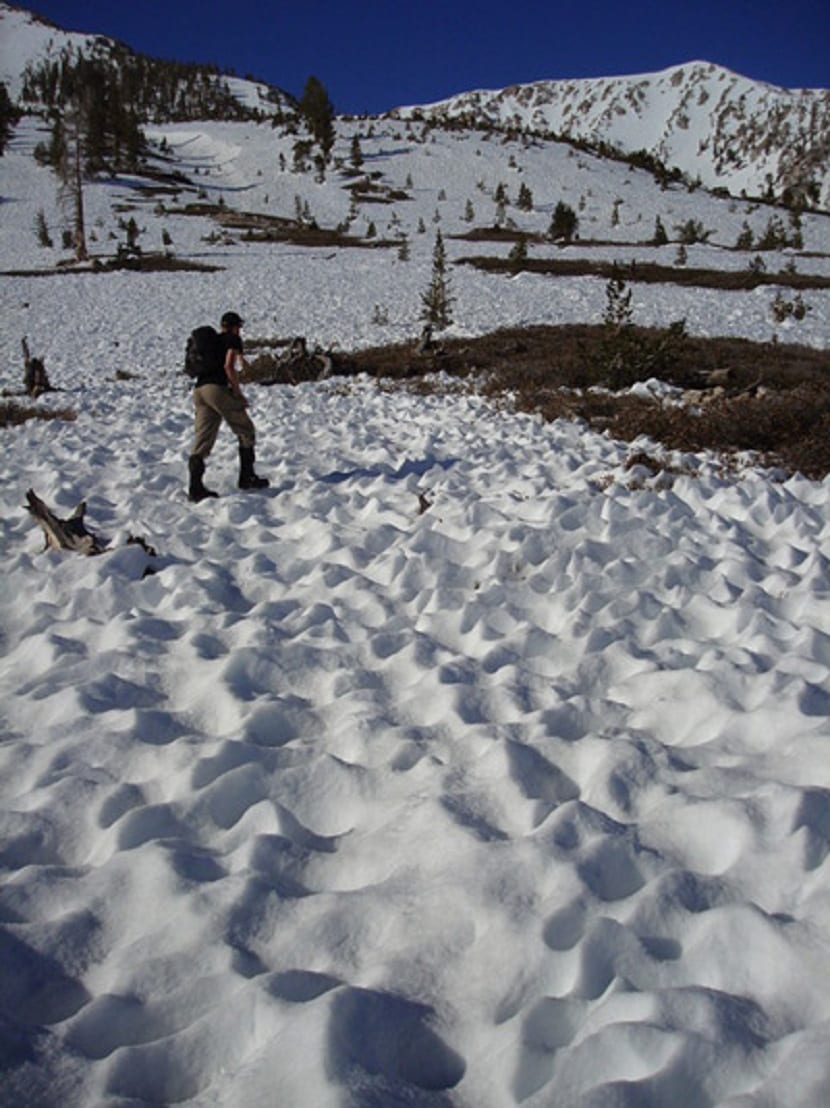 They are cavities that form due to the melting of snow in some areas and can reach highly variable depths. At the edges of each hole, the water molecules evaporate and in the center of the hole, the water is trapped. This forms a liquid layer which, in turn, causes more snow to melt.

These formations take place when the fusion voids become very large. The penitents are the pillars that are formed from the intersection of several cavities. Columns are formed that take on the appearance of a penitent. They occur in large areas with high altitudes and low latitudes. The penitents reach greater development in the Andes and Himalayas, where they can measure more than one meter, which makes walking difficult. The columns tend to lean towards the mid-day sun.

It is formed when the thaw season begins. Drainage networks are formed caused by water runoff. The true flow of water does not occur on the surface, but within the blanket of snow. The water slides inside the ice sheet and ends up in the drainage networks.

Drainage channels can cause avalanches and make skiing difficult.

The dunes are formed by the action of the wind on the snowy surface. The dry snow takes erosive forms with small waves and irregularities.

They are accumulations of snow on the ridges that constitute a special risk, since they hang forming an unstable mass that can be detached by the passage of people or by natural causes (strong wind, for example). It is capable of forming avalanches, although its danger is present just by falling by itself.

With this information you will surely be able to know the snow much more thoroughly and recognize the type of snow that is there at that moment the next time you go to a snowy place.