We live on a very complex and complete planet that has innumerable aspects that make it stay in balance and allow life. The structure of the Earth It is divided into two parts fundamentally. First the interior of our planet is analyzed. It is important to know what is inside the Earth to understand many external aspects. Afterwards, it is also necessary to analyze all the external parts in order, as a whole, to know the planet where we live.

In this post we are going to analyze and know in depth the entire structure of the Earth. Do you want to know more about it?

Internal structure of the Earth

The Earth presents a structure formed by concentric layers where all the elements that compose it alternate. The fact that they are separated by layers we can know thanks to the movement of seismic waves when an earthquake occurs. If we analyze the planet from the inside to the outside, we can observe the following layers. 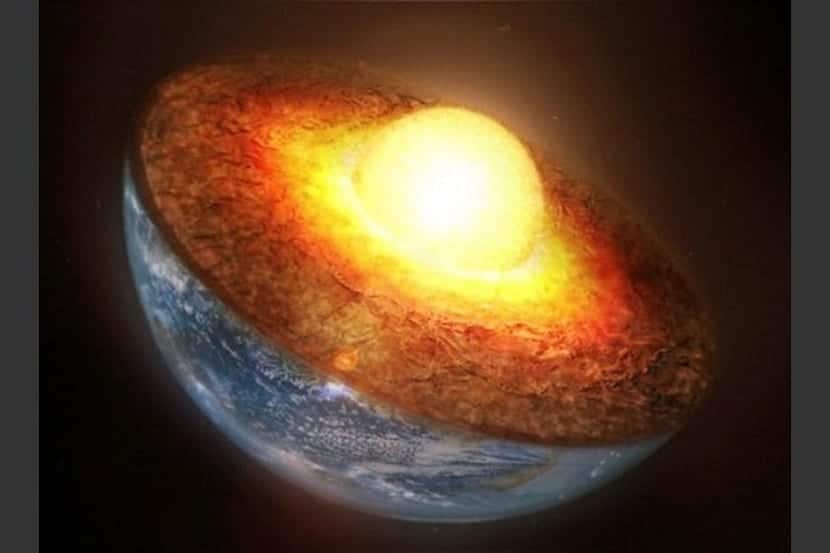 The core of the Earth is the innermost layer where large amounts of iron and nickel are found. It is partially molten and is the cause of the Earth having a magnetic field. It is also called the endosphere.

The materials are melted due to the high temperatures at which the core is found. Some of Earth's internal processes manifest on the surface. We can see earthquakes, volcanism or the displacement of the continents (plate tectonics).

The Earth's mantle is above the core and is made up mostly of silicates. It is a layer denser than the interior of the earth and less dense as it approaches the surface. It is also called the mesosphere.

Along this wide layer take place numerous phenomena of convection of materials. These movements are what make the continents move. The hotter materials that come from the core rise and when they cool, they return back to the interior. These convection currents in the mantle are responsible for the movement of tectonic plates.

It is the outermost layer of the Earth's interior. It is also called lithosphere. It is composed of light silicates, carbonates and oxides. It is thickest where the continents are located and thinnest where the oceans meet. Therefore, it is divided into oceanic and continental crust. Each crust has its own density and is made up of certain materials.

It is a geologically active area where many of the internal processes are manifested. This is due to the temperatures inside the Earth. There are also external processes such as erosion, transport and sedimentation. These processes are due to solar energy and the force of gravity.

External structure of the Earth

The outer part of the Earth is also made up of several layers that group all the terrestrial elements.

It is the set of the entire area of ​​water that exists in the earth's crust. You can find all the seas and oceans, lakes and rivers, groundwater and glaciers. The water in the hydrosphere is in continuous exchange. It does not stay in a fixed place. This is due to the water cycle.

Only the seas and oceans occupy three-quarters of the entire earth's surface, so their importance at the planetary level is great. It is thanks to the hydrosphere that the planet has its characteristic blue color.

Large amounts of dissolved matter are found in bodies of water and are subjected to great forces. The forces that act on them are related to the rotation of the Earth, the lunar attraction and the winds. Because of them, movements of water masses such as ocean currents, waves and tides occur. These movements have a great impact on a global level, since they affect living beings. The climate is also affected by sea currents with effects like El Niño or La Niña.

As for fresh or continental waters, we can say that they are very important for the functioning of the planet. This is because they constitute the most conditioning erosive agents on the earth's surface. 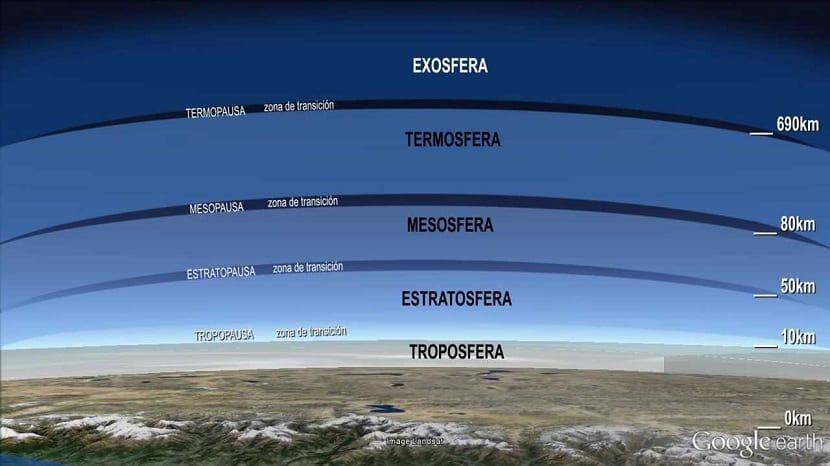 The atmosphere It is the layer of gases that surrounds the entire Earth and they are essential for life to develop. Oxygen is the conditioning gas for life as we know it. In addition, many gases help filter solar radiation that could be lethal to living beings and ecosystems.

The atmosphere in turn is divided into different layers, each with a different length, function and composition.

Starting by the troposphere, is one that is directly on the solid surface of the Earth. It is very important because it is where we live and the one that gives rise to meteorological phenomena such as rain.

The stratosphere it is the next layer that extends above about 10 km of the troposphere. In this layer is the protection of UV rays. It is the ozone layer.

The mesosphere it follows higher and also contains some ozone.

Thermosphere it is called this way because, due to the effect of solar radiation, temperatures can exceed 1500 ° C. In it is an area called the ionosphere, in which many atoms lose electrons and are in the form of ions, releasing energy that constitutes the northern lights.

The biosphere it is not a layer of the Earth itself, but it is the set of all the ecosystems that exist. All living beings that inhabit our planet make up the biosphere. Therefore, the biosphere is part of the earth's crust, but also of the hydrosphere and the atmosphere.

The characteristics of the biosphere is the so-called biodiversity. It is about the wide variety of living beings and life forms found on the planet. In addition, there is an equilibrium relationship between all the components of the biosphere that is responsible for everything to function properly.

Is the structure of the earth homogeneous or heterogeneous?

Thanks to various study methods, it is known that the interior of our planet is heterogeneous. It is structured in concentric zones that have different properties. The study methods are as follows:

Among the main indirect methods that exist to make the internal structure of the earth are seismic waves. The study of the speed of the waves and their trajectory has made it possible to know the interior of the Earth, both physical and structural. And is that the behavior of these waves changes depending on the properties and nature of the rocks they go through. When there is a zone of change between materials, it is called discontinuity.

From all this knowledge, it follows that the interior of the Earth is heterogeneous and is structured in concentric zones that have different properties.

I hope that with this information you can learn more about the structure of the Earth and its characteristics.