Surely you have ever noticed the sea breeze on your skin and you have wondered how it is formed and why it is. Both the Earth and the water are continually warming and cooling given the differences in temperatures that occur between day and night. When the air on the surface heats up even more than normal during the day, upward air currents form, forming the sea breeze.

Do you want to know more about the sea breeze? 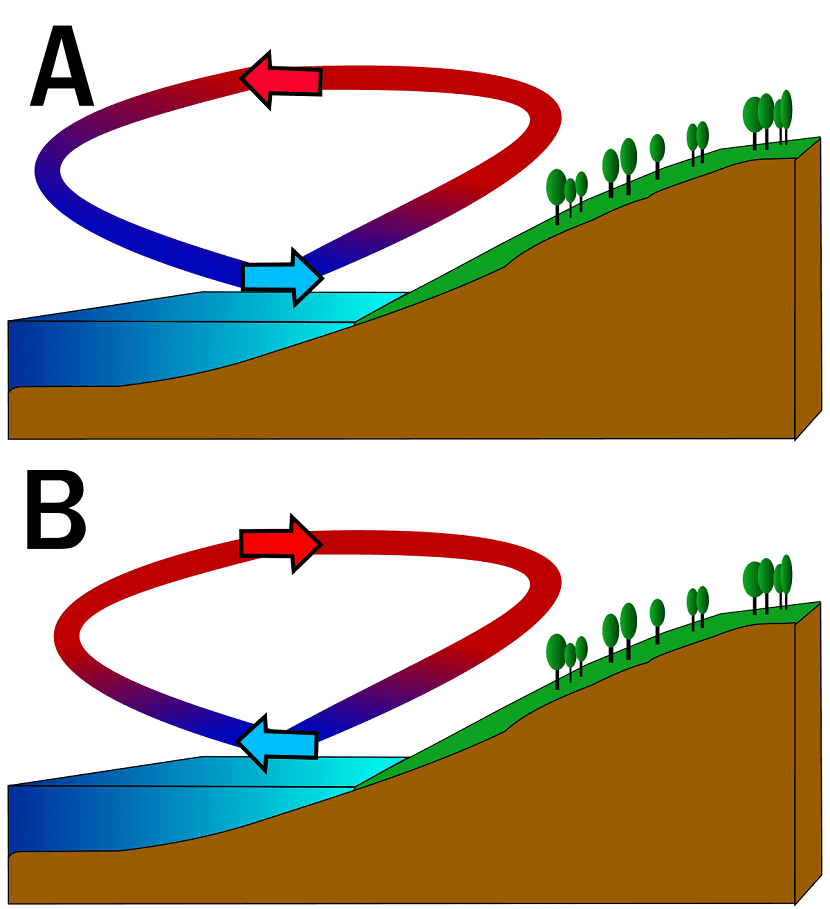 The sea breeze is known as virazón. Due to the differences in temperature between day and night, the surface heats and cools cyclically. This causes the surface of the Earth, when it warms up more than normal and it does so before the surface of the sea, Generate hot, rising air currents.

When hot air rises, since it is warmer than the sea surface, it leaves a low pressure gap. The air rises higher and higher as it warms and the colder air close to the sea surface leaves a place with high pressures, which makes want to occupy the space left by the air that has risen. For this reason, the air mass with the highest pressure over the ocean tends to move over the lower pressure zone located near the land.

This makes the air from the sea surface enter the coast and being cooler it is usually more pleasant in summer, but colder in winter.

When are they formed?

Sea breezes form at any time. It is only necessary for the sun to heat the surface to a temperature higher than the air around the sea surface. The days with less wind in general, there may be more sea breeze, since the earth's surface warms up more.

The most pleasant breezes to feel are formed in spring and summer thanks to the fact that the sun warms the surface of the ground more and the water is still cold from winter. Until sea temperatures increase due to the acclimatization effect, the sea breezes will be more continuous.

The strength of the wind generated by the sea breeze depends on the temperature contrast. The greater the difference between the temperature of both surfaces, the higher the wind speed, since there is more air that wants to replace the low pressure gap left by the rise of the warmer air.

Characteristics of the sea breeze

The sea breeze tends to blow perpendicularly towards the coast and is able to reach 20 miles out to sea. Since a strong temperature contrast is necessary between the land and sea surfaces, the maximum force of the sea breeze is achieved after noon, when the sun heats most powerfully. Wind speed also depends on the orography of the terrain. Although they are generally light and pleasant winds, if the orography is steeper, the wind can reach up to 25 knots.

Sometimes, the convection that occurs above the temperature of the earth and the strong humidity that the surrounding air brings from the sea, form vertically developing clouds (called cumulonimbus) that can give rise to atmospheric instability situations and strong electrical storms with great rainfall in a short time. This is the origin of some well-known summer storms: those that in just 20 minutes, leave behind a waterspout that can cause serious damage.

The islands also have the effect of a sea breeze along the entire coast. Typically, they also peak after noon. This means that all the most suitable places to anchor boats are downwind and it is more difficult to find one where the sea breeze does not blow or is weaker.

With the same effect that gives rise to the sea breeze, some of the monsoons are formed. This effect of occupation of the colder air in the low pressure zone left by the rising warm air, increased to a larger scale, makes the winds more powerful and forms much denser and more dangerous vertically developing clouds. These clouds leave abundant rainfall as they are monsoons in areas near the Himalayas.

In summer, the air masses of Southeast Asia heat up and rise, leaving an area of ​​low pressure on the earth's surface. This area is replaced by colder air from the sea surface that comes cooler from the Indian Ocean. When this air comes into contact with the warmer area, it reaches the high mountains and begins its ascent until it reaches higher areas and cools, giving rise to very heavy rainfall.

We named the terral because it is related to the sea breeze, although its situation and effect is totally opposite. During the night, the surface of the earth is cooling since the sun is not exerting any kind of effect. However, the sea surface better conserves the heat absorbed throughout the day by the hours of sunshine. This situation causes the wind to blow in the opposite direction, that is, from the land to the sea. This occurs because the temperature of the air near the sea surface is higher than that of the land surface and generates an area with a lower atmospheric pressure. Therefore, the coldest air on the earth's surface wants to cover this area of ​​low pressure and generates a sea breeze in the land-sea direction.

When the coldest air from the land meets the warmer air from the sea surface, it is formed what is known as terral. A warmer wind blowing towards the sea.

With this information, it is sure that it has become clearer why the sea breeze occurs.