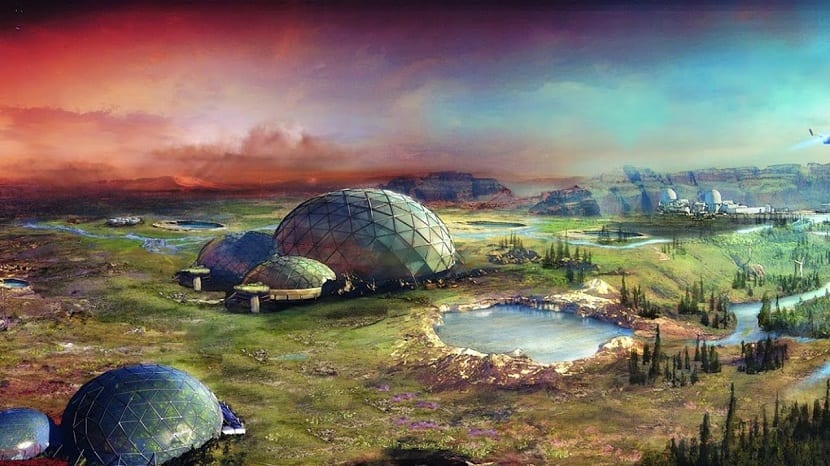 The word "terraforming" is the concept that describes the actions of transforming a planet to make it habitable. The terraforming of Mars is precisely that, the planetary engineering process that would help transform the prevailing climate of the planet. This process would aim to increase the temperature of the cold and frozen planet. Also to be able to create a denser atmosphere, that to give you an idea, it is 1% of what we have here, that is, we could say that it hardly has any. And of course, create rivers, that had oxygen, that there were plants, trees, fauna ... total, that was the closest thing to Earth.

Many scientists (and some visionaries) have given proposals for how to achieve this process. It may seem easy, but if you reason it well, it is not so easy. As a result of the latest discoveries, how the great blocks of ice and the possibility that water is under them, have greatly fueled the spirits to terraform the planet. By NASA, and more companies, have already made proposals on the profile of people who are going to go there to start this ambitious process. A one-way trip, but not a return trip, that we can begin to see, in the next decade. However, the remodeling of a planet is not an easy task, and it is that when trying to modify it, things have been discovered where many experts in their proposals, had not initially taken into account.

Create the climate and atmosphere on Mars

Image of Mars from space

Water cannot exist in a liquid state. Currently Mars is a planet with a very poor atmospheric pressure level, in the order of 0,005, taking Earth as a reference, 1. We also have to count the temperature, on Earth about 15ºC, on Mars, although there are no records voluminous enough to determine correct accuracy, we can say that it is between about -40 / -70ºC. There are highly variable records, such as the difference between maximum and minimum detected by the Viking probes, the warmest being -13ºC and the cold being -89ºC. Both records can be exceeded by quite a difference depending on the point on the planet where it is being measured.

To obtain water, it would not be enough just to increase the temperatureSince it has such a low pressure, it can only exist in a gaseous or solid state. For it, we must increase the pressure above 0,006. With a high enough atmospheric pressure and a higher temperature on the planet, one of the basic pillars of Terraforming would have been solved. But ... How to get pressure and temperature to increase?

The process to get water

We are aware that we need to increase the pressure, increase the temperature, and all this to also achieve water. One of the most interesting ways to accomplish all things is by bombarding the poles. By bombarding them, the ice could increase the degrees, part of the CO2 would sublimate. Sublimate means going from solid to gaseous. This would cause an increase in CO2 in the atmosphere, which could increase the atmospheric pressure up to 0,3. As you can see in the drawing, Mars is at point A. The so-called triple point, B, is the area where we can begin to find water. Point C would be the point where we should arrive.

One of the proposed forms of bombing has also come from the mouth of Ellon Musk, known for being the owner of several companies, including the famous Tesla or Space-X. Ellon musk proposed a while ago, to bomb with nuclear bombs. A rather eccentric idea, but one that pursues the following. The chain reaction that is pursued after the release of CO2 to gaseous form is that the pressure increases, this increases the temperature, which increases more CO2 release, which causes the pressure to increase again, etc. From this way, we would get a positive feedback process.

The process to get oxygen

Once the ice is converted into water, we would have an atmosphere made up mostly of carbon dioxide and water vapor, but still with a lack of oxygen. The idea here would be to transport phytoplankton from Earth. Phytoplankton provide our planet with more than 50% of the oxygen we breathe. We could in this way create oxygen, and achieve a more breathable atmosphere.

This whole initial process would take many years. As we have been able to verify, we could get to Terraform Mars. The first humans that NASA plans to send are expected to be from the year 2030. It must be said that some companies have the ambition for it to be in the next decade. Some of them, such as SPACE-X, begin to propose models of how to make these trips more economical and efficient.