The solar system it is immense in size and we could not go all over it in the life we ​​have. Not only is there a solar system in the universe, but there are millions of galaxies like ours. The solar system belongs to the galaxy known as the Milky Way. It is made up of the Sun and nine planets with their respective satellites. A few years ago it was decided that Pluto was not part of the planets because it did not meet the definition of a planet.

Do you want to know the solar system in depth? In this post we are going to talk about the characteristics, what composes it and what is its dynamics. If you want to learn about it, keep reading 🙂

Composition of the solar system

As a Pluto is no longer considered a planet, the solar system is made up of the Sun, eight planets, a planetoid and its satellites. Not only are these bodies, but there are also asteroids, comets, meteorites, dust, and interplanetary gas.

Until 1980 it was thought that our solar system was the only one in existence. However, some stars could be found relatively close and surrounded by an envelope of orbiting material. This material has an indeterminate size and is accompanied by other celestial objects such as brown or brown dwarfs. With this, scientists think that there must be numerous solar systems in the universe similar to ours.

Our solar system is located on the outskirts of the Milky Way. This galaxy is made up of many arms and we are in one of them. The arm where we are is called the Arm of Orion. The center of the Milky Way is about 30.000 light years away. Scientists suspect that the center of the galaxy is made up of a giant supermassive black hole. It is called Sagittarius A.

Planets of the solar system 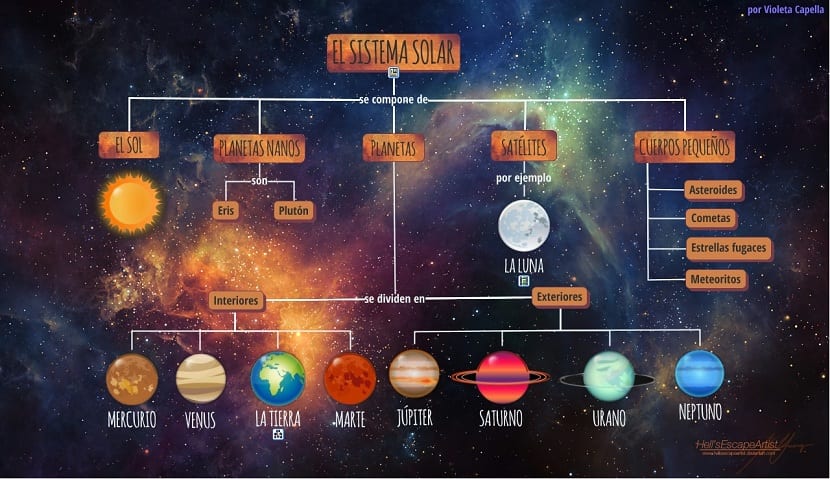 The size of the planets is very varied. Jupiter alone contains more than twice the matter of all the other planets combined. Our solar system arose from the attraction of the elements of a cloud that contained all the chemical elements that we know from the periodic table. The attraction was so strong that it ended up collapsing and all the materials expanded. Hydrogen atoms were fused into helium atoms through nuclear fusion. This is how the Sun was formed.

At present we find eight planets and the Sun. Mercury, Venus, Mars, Earth, Jupiter, Saturn, Uranus and Neptune. The planets are divided into two types: the interior or terrestrial and the exterior or Jovian. Mercury, Venus, Mars and Earth are terrestrial. They are the closest to the Sun and are solid. On the other hand, the rest are considered planets farther from the Sun and are considered "Gaseous Giants". 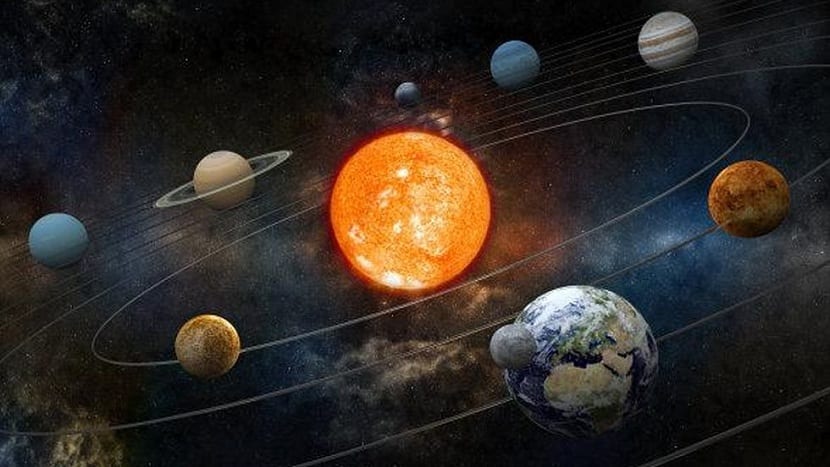 There are numerous dwarf planets that are smaller in size. Are Ceres, Pluto, Eris, Makemake and Haumea. It may be the first time you hear them, since these planets are not included in the syllabuses of the institute. In schools they focus on studying the predominant solar system. That is, all those elements that are most representative. The most dwarf planets needed new technologies and digital cameras to be discovered.

The solar system is divided into different regions where the planets are located. We find the region of the Sun, that of the Asteroid Belt located between Mars and Jupiter (containing the majority of asteroids in the entire solar system). We also have the Kuiper Belt and the Scattered Disc. All objects beyond Neptune are completely frozen by its low temperatures. We finally meet the oort cloud. It is a hypothetical spherical cloud of comets and asteroids found on the edge of the solar system.

From the beginning, astronomers have divided the solar system into three parts:

On many occasions you have heard about the possible electronic errors that can be caused by the solar wind. It is a river of particles that are leaving the Sun continuously and at high speed. Its composition is of electrons and protons and covers the entire solar system. As a result of this activity, a bubble-shaped cloud forms that covers everything in its path. It has been called the heliosphere. Beyond the area where it reaches the heliosphere, it is called a heliopause, since there is no solar wind. This area is 100 Astronomical Units. To get an idea, an astronomical unit is the distance from the Earth to the Sun.

As you can see, our solar system is home to many planets and objects that are part of the universe. We are just a small speck of sand in the middle of a huge desert.