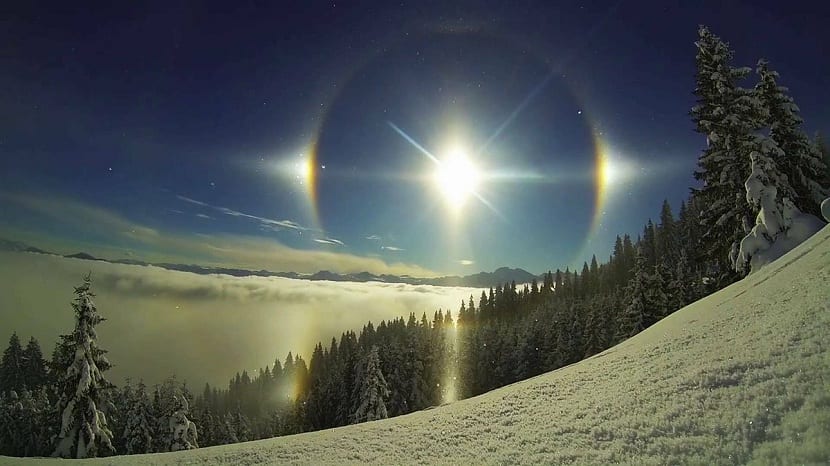 On numerous occasions, scientists have had great difficulty in explaining some meteorological phenomena that take place on our planet. Either according to its strange frequency or because of its operation. In this case we are going to talk about a phenomenon whose origin was slow to be explained by meteorological physicists. It is about the solar halo.

The solar halo is a luminous circle that sometimes forms around the Sun and can be seen from the Earth's surface. But how is it formed and in what situations? If you want to know more, keep reading.

How is a solar halo formed?

This phenomenon consisting of a bright circle around the Sun it is known as halo or antelia. It mainly occurs in colder places like Russia, Antarctica, or northern Scandinavia. However, as long as the right conditions are present for its formation, it can occur in other places.

This halo is formed by the ice particles that are in suspension in the highest part of the troposphere. When sunlight falls on these ice particles, refract light making the entire spectrum of colors (similar to that of a rainbow) visible around the Sun. We could call it a circular rainbow characterized mainly by being iridescent.

It is also necessary that the type of cloud currently in the sky is cirrus clouds. These clouds are formed by small ice crystals that can derive the reflection and refraction processes of the sunlight.

High in the troposphere, sunlight strikes suspended ice crystals and fragments as they pass through. The hot air that rises from the earth's surface makes the humidity rise, giving rise to the formation of clouds. When the clouds reach the highest part of the troposphere, it converts that humidity into water crystals that, when receiving direct sunlight, decompose it to create the solar halo. 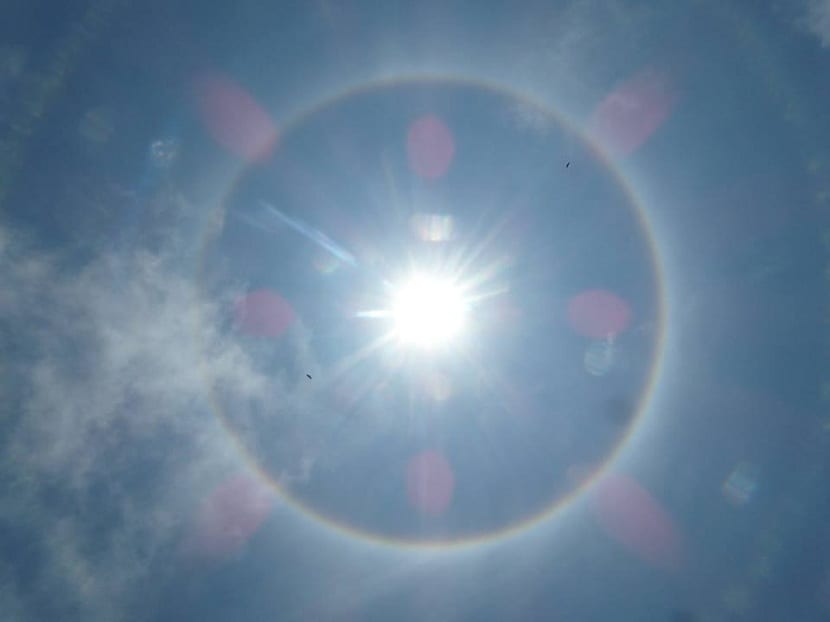 Solar halos normally have an angle of about 22 degrees. When a solar halo takes place, if a person points with his hand facing the Sun, it does not matter from where he is pointing, the halo will form an angle of 22 degrees.

Its inner edge tends to have the reddest color in the spectrum and its most common shape is that of a ring of light that borders the Sun. On some occasions you can see another halo that is caused by the ice crystals that are suspended around the sun. main halo with an angle of 46 degrees from the center of the Sun. There are also other types of light formations that resemble the solar halo. These are the so-called false suns or parahelios and can also be seen at 22 degrees with respect to the sun, both vertically and horizontally. These false suns are luminous images whose shape is very similar to the disk of the Sun.

Confusions when seeing a solar halo

Sometimes a solar halo can be confused with the crowns that form on days when the weather is foggy. The crowns that can be seen when the thinnest clouds cover the sky are produced by the diffraction of light when passing through the particles that are suspended in the atmosphere. These crowns can be assimilated, in a matter of formation conditions, to rainbows and arcs of white or yellowish light. These arcs of white light form when there is fog. Sunlight strikes the fog bank and the light arc occurs at an angle of 40 degrees from the center of the sun.

How can it be visualized? 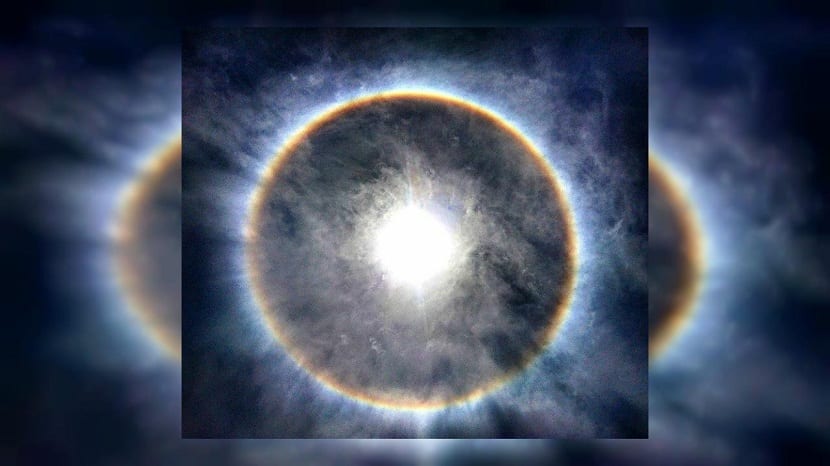 The most common halo is formed by the refraction processes in the ice that has a hexagonal shape. This shape in ice makes it possible to refract more colors in the spectrum.

As mentioned in other articles such as the one on the Layers of the atmosphereAs we increase the height in the troposphere, the temperature decreases. In this way, in the highest part of the troposphere, temperatures are lower. So much so that almost at a height of 10 km, the ambient temperature is -60 degrees. At these low temperatures, the suspended water droplets are ice crystals that can refract the sunlight and form the halo.

To correctly see the solar halo and enjoy this strange phenomenon, It should be visualized avoiding looking directly at the Sun. We remember that looking at the Sun directly can cause serious damage to the cornea and loss of vision due to the large amount of solar radiation and UV rays that damage the tissue of the eye. The best thing to do to see this type of halo is to use a circular object that helps us cover the Sun and be able to enjoy the vision of the halo. The glasses used to visualize eclipses of the Sun can also be used.

And you, have you ever seen a solar halo?