Almost everyone has liked to see it snow or wants to see it in the event that they have never been able to experience it. In both animated and non-animated films, it has always caused feelings of home, cold, winter, Christmas, etc. See how they fall snowflakes through the window can be quite a sight.

But Do we know what snowflakes are, how they are formed, and the types of snowflakes that exist?

What is a snowflake and how is it formed?

Snowflakes are clusters of many ice crystals that form in clouds at high altitudes and at very low temperatures. In order for these ice crystals to form, a droplet of water must first be frozen around a suspended particle inside the cloud. These particles can be dust or pollen and are called condensation core. As the water inside the cloud freezes, it takes the shape of a hexagonal prism. For the water droplet to take this shape, it is necessary that the temperature of the cloud reaches at least -12 or -13 °. In this way, the rest of the water droplets can go around the glass and condense on its surface.

Once the rest of the droplets gradually add to the ice crystal, it moves through the rest of the cloud. The water droplets that join the glass do so at its edges since they protrude more than any other part. That is why the corners grow more and begin to form the "arms" called dendrites. This process of formation is called branching and it is what makes the snowflake so complex in shape.

Finally, the snowflake will move along the cloud until it falls under its own weight.

To emphasize even more the importance of this fact, in 1988, a Wisconsin team of researchers showed that the growth of an ice crystal depends on so many factors that they are so irregular that it is highly unlikely that two equal flakes exist in nature. Although also, on the other hand, they were able to simulate in the laboratory environmental conditions so similar that they were able to create two totally identical ice flakes.

Next we are going to look at the most common types of ice crystal formations found in nature:

These types of prisms are the most basic of snowflakes. Its shape can vary from long hexagonal prisms to some fine hexagonal plates. The size of these prisms is so small that it is very difficult to see them with the naked eye.

They are the most used to draw and represent the classic snowflake. These are laminated ice crystals with six arms that are wide enough to form a star. Normally we find that they have the edges of the branches decorated with symmetrical marks that make them more special. 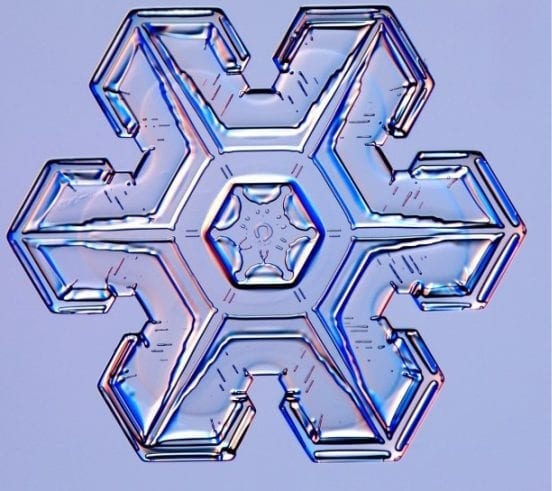 The term dendrite refers to the tree shape, that is, to branched forms of ice crystals. This is why stellar dendrites are the type of snowflake that has 6 main branches and several types of secondary branches. These snowflakes are larger than the previous ones and can be seen with the naked eye.

Hexagonal shapes sometimes have more conical shapes at their ends that make them look like hollow columns. They are so small in size that it is almost impossible to see them with the naked eye. These flakes form at a temperature around -5 ° C.

If ice crystals grow at a temperature of only -2 ° C, they usually take on triangular shapes rather than hexagonal. This process usually occurs very rarely.

This type of snowflake forms in situations in which as the ice crystal forms, several are formed that grow in random orientations. When the different crystals formed at the same time become columns, they are called a bullet rosette. They are so called because when the crystals fall and break, individual bullet-shaped ice crystals form.

In tourist environments, machines are used to generate artificial snow to help skiers modify the slopes well and not run out of snow to practice the sport. However, the snowflakes that form from this artificial snow have nothing to do with those formed by natural processes. They do not have geometric shapes.

What is the average size of snowflakes and what determines their size?

Snowflakes are usually one centimeter in diameter, always depending on the conditions of their formation. They can range from a centimeter in diameter to sometimes they usually reach 8 to 10 centimeters. As an anecdote I will tell you that the largest snowflake that has been recorded was documented by Fort Keogh, in Montana in January 1887 and measured about 38 centimeters in diameter.

The structure of the snowflake is determined by the temperature and humidity of the air it passes through as the snowflake falls to the ground. In order to classify all types of snowflakes based on air temperature, these conditions have been simulated in laboratories to be able to know how they influence:

One of the characteristics of snowflakes that most attracts the attention of people and scientists is why the flakes are symmetrical. In the world of mathematics, a symmetrical object is a perfect object. This occurs in the snowflakes since as the water droplets unite and condense along the branches of the ice crystal, as they form at the same environmental conditions at the same time, they are formed symmetrically. However, we probably cannot appreciate this well, since when the snowflakes fall to the earth's surface, they will arrive broken, fragmented or united with other flakes.

Why do the snowflakes look white?

It is a question that more than one will have ever asked. Why, even though snowflakes are made of water and ice, do they look white? Well, actually, the snowflakes taken individually they look transparent, especially if you have them close to the microscope. However, when all the snowflakes are seen clumped together it appears white because light reflects off multiple surfaces of ice crystals and is scattered equally in all their spectral colors. Since white light is made up of all the colors in the visible spectrum, our eyes see white snowflakes.

As a small curiosity I will talk a little about the sound that snowflakes have when falling. If you have ever seen snowing and you have stopped to listen to the noise that snowflakes make when falling, you will realize the silence there is. Why do the falling snowflakes not sound if there are some about 8 centimeters in diameter?

Well, this is because the snowflakes falling and accumulating on the ground trap the air between their individual crystals. This causes the absorption of much of the vibration produced by falling and therefore, they do it more quietly. It is said that a layer of accumulated snow about 2 centimeters thick can slow down the acoustics of a landscape. Although it should be mentioned that as the snow hardens and compacts more and more, its noise absorption quality is lost.

With these characteristics and information about the snowflakes we can see the snowfall from another point of view. Being able to know the different types of flakes that can be formed in nature and trying to identify them when you have them in your hands can be fun and entertaining. So we can either go to a place where it snows or wait for it to snow in your city.

Full path to article: Network Meteorology » Meteorology » Science » Snowflakes, how are they formed and what do their types depend on?