Surely you have ever stared at the rain, puzzled and amazed by the way the raindrops fall on it. Drops that always resemble a circular or oval shape and that, in person, you see them fall as if they were needles. What mysteries are behind the formation of drops of water? What is hidden under the surface of tiny water droplets and why do water droplets form?

If you want to decipher all these enigmas and doubts, keep reading 🙂

A drop of water

Water is the most common element that exists on the earth's surface. Thanks to water, life as we know it can develop. If it weren't for her, there would be no rivers, lakes, seas or oceans. What's more, we couldn't live since we are made up of 70% water.

Water can be found in all three states: solid (in the form of ice), liquid (water), and gas (water vapor). Its change of state depends entirely on temperature and pressure. When heat is applied to ice, its energy increases the vibrations of the water molecules inside it and it begins to melt. If this heat continues, the particles will separate so much that they will turn into gas. Water vapor they are just tiny droplets of water. But…

Why are drops of water formed?

When we point out the molecules that make up water, we make it a circular shape similar to balls that are held together by vibrating and rotating. If this were so, why when the water is spilled it does not spread to the thickness of a single molecule? This occurs because of what is called surface tension. Thanks to the surface tension that exists between the molecules, we can make a needle float on top of a glass or the shoemaker insects can walk through the water.

To understand this, you need to know what is going on inside the liquid. Water is made up of molecules and these, in turn, are atoms. Each atom has positive charges (protons) and negative charges (electrons) and they have one or the other form, depending on the type of molecule they are forming. Sometimes the electron shell attracts each other more, and sometimes the protons and electrons. Therefore, we know that there are forces of attraction and repulsion.

When we look at a molecule inside the liquid, we can see how it is completely surrounded by more molecules and where all the intermolecular forces that exist cancel each other out. If one were to shoot to the left, the other would shoot to the right with the same intensity, so they cancel each other out. This makes the molecules have less energy and are more stable. Always looking for the state that costs the least energy to maintain, what is hot cools down, what is very high falls, etc. 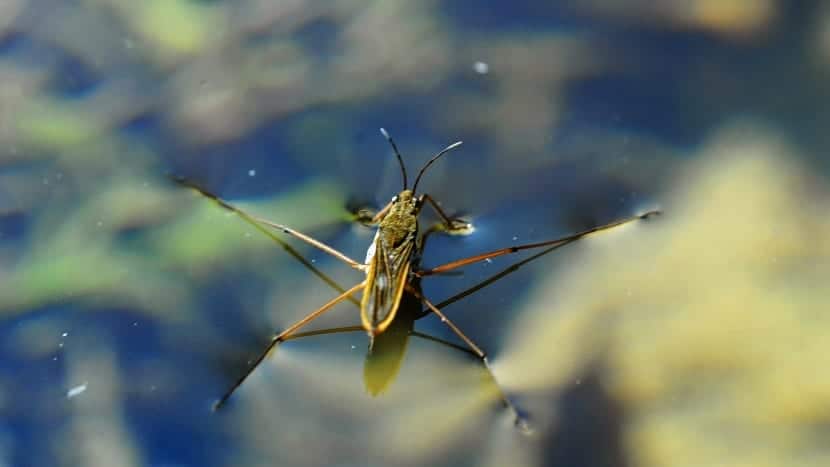 The thing is complicated when observing the molecules that are in the superficial layer of the water. These molecules are not completely surrounded by other molecules. They only receive strength from one side, but not from the other. To fix this problem, the molecules reposition themselves trying to find a shape to minimize the surface area they occupy. For the same volume, the geometric body with the smallest surface area is the sphere.

For all these reasons, water droplets are formed when the water is poured into a circular or sphere shape. This is also the reason why objects that have little mass and are more dense than water (such as cobbler insects) can float, since the surface of the water tends to not break to allow a foreign body to enter.

The surface tension in water is higher than in other liquids since the geometry of its molecules is angular and causes more forces to exist.

Once the reason why drops of water are formed, it is time to explain why these drops take the shape of a tear when they fall from the sky during the rain.

Usually a teardrop-shaped drop of water is depicted. However, unless these drops fall on a window, it does not have a similar shape. Small raindrops have a radius of less than a millimeter and are spherical in shape. The largest ones take the shape of hamburger buns when they reach radius values ​​greater than 4,5 mm. When this happens, the droplets distort into a parachute with a tube of water around the base and spread out into smaller droplets.

This change in the shape of the water droplets is due to the result of the tension of two forces acting simultaneously. The first is the surface tension before seen and the second is the air pressure, layer to push the base of the drop upward as it falls. When the drop of water is smaller, the surface tension exerts a greater force than that of the air pressure, so that the drop takes the shape of a sphere. As the size of the water drop increases, the speed with which it falls increases, in such a way that so does the force with which the air pressure acts on the water drop. This causes the drop to become more flattened and a depression forms inside it.

When the radius of the drop exceeds 4 mm, the depression in the center of the drop increases in such a way that it forms a bag with a water ring on top and from this large drop several small ones are formed.

With this information you will be able to know a little more about the drops of water and why they have that shape when they are in different places. Now you can look through the window with a greater knowledge about the element that gives us life.