El Continental weather it is one of the most spectacular. Why? Basically, because the four seasons are very well differentiated from each other: in spring the plants are filled with flowers, in summer it is hot, in autumn the leaves of the trees change color, and in winter the landscape is covered with snow.

There is not as much variety of plants and animals as in a tropical climate, but with abundant rains, the forests and landscapes are amazing places, brimming with life.

Where does it appear and how is it characterized?

Climograph of Zaragoza (Spain). In this province the climate is continental Mediterranean, with very hot and dry summers and cool and humid winters.

This type of climate is what occupies the largest area in the Northern Hemisphere, appearing in central and eastern Europe, central Asia, inland China, Iran, inland US, Canada. In the Southern Hemisphere there are also, as in some areas of the north of the African continent and in interior areas of Argentina.

The places in which there is a continental climate are characterized by being located in middle latitudes and for having mountainous barriers that prevent the influence of the sea or cold winds from the poles which can extreme temperatures.

As for the seasons, they are very well differentiated, as we said before. But let's look at it in more detail. 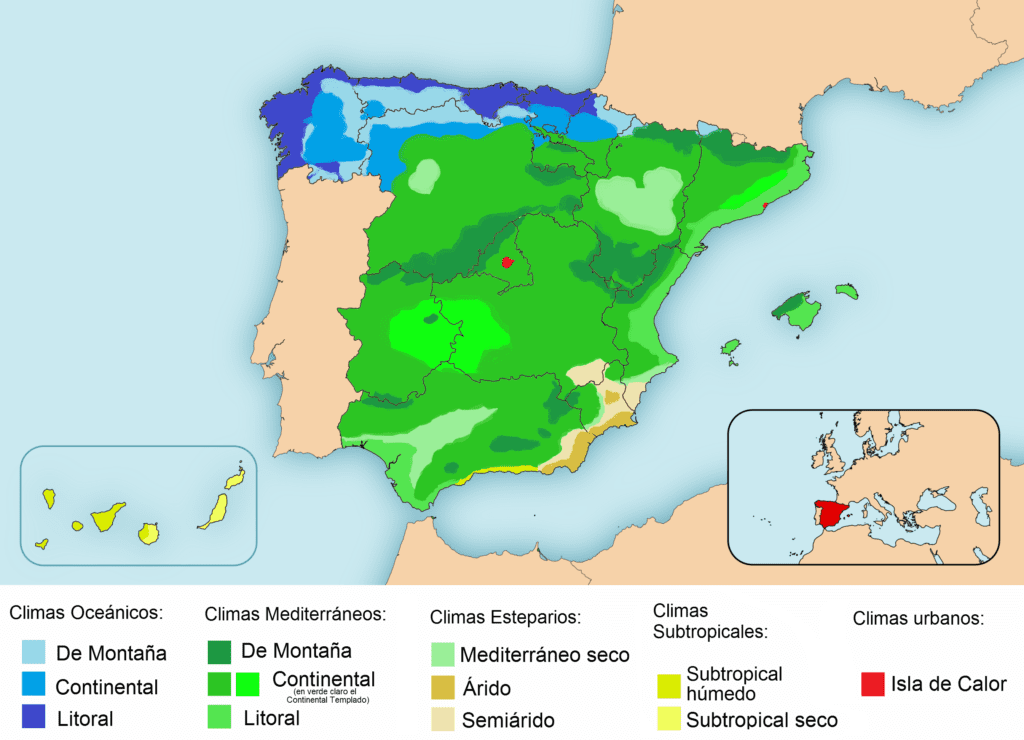 We have seen the temperatures and rainfall that can occur in a continental climate, but to know more, what better than to know the different types that there are, since depending on the geographical location, there may be some variations. Thus, many types of continental climate are known, including:

It is the one that occurs in the interior of the Iberian Peninsula, north of Italy, interior of Greece, the Saharan Atlas, among others. It is characterized by having very hot summers with little rain, and cold winters with frosts.

This type of climate is the one that occurs in North Korea, northern China, and in some Russian cities, such as Khabarovsk. Has a average annual temperature above 0ºC but below 10ºC. The annual rainfall is more or less 500mm.

It occurs in most of eastern and central Europe and southeastern Canada. It is similar to the previous one, but a little cooler and drier.

This type of climate is found in Central Asia, Mongolia, among others. It is very hot during the summer, and cool in winter., being able to produce some frosts.

In this type of climate is where we can see the deciduous forests. Trees such as maples and oaks, the vast majority of conifers (pines, firs, larches, cypresses), live in the middle latitudes of the planet. Life is not easy for them: if the rains are abundant and the temperature is not extreme, they grow as much as they can; On the other hand, with the arrival of the cold, they must save energy to be able to survive the winter, stopping feeding their leaves in the case of deciduous trees, and stopping their growth. The temperature varies a lot from season to season, but thanks to the evolution they have had, they have managed to reach our days.

Animals don't have it easy either, especially during winter. In fact, there are many birds that migrate to warmer latitudes, thus moving away from the cold and frost. Those who stay, like brown bears, they go into caves to hibernate. Other animals, such as wolves, foxes, weasels, deer or reindeer, look for a place that will serve as protection against low temperatures.

Food is very scarce during the winter, as few animals dare to go out, and most of the fruits of the trees have already been collected. Fortunately, this doesn't last forever, and in spring the forest comes alive again.

Did you know the characteristics of the continental climate?