The stars in the night sky are arranged in a random way. Some look bigger and some look smaller for various reasons. One is the size of the star itself and the other is the distance between that star and our planet. What is thought is that there are imaginary lines that join the stars and the one we call constellations Constellations have a meaning and have been useful in history. Here we are going to tell you more about the constellations and name some of the most important.

Do you want to increase your knowledge about astronomy and know more about the constellations? Here we tell you.

Constellations in the night sky

Constellations are nothing more than a group of stars that, completely imaginary form, they take forms from the unions of lines. It is as if we join dots to shape it. The names of these constellations come from mythological beings, animals, people who have done great work for humanity or even important objects.

They are named through the traditional proper names from Latin, Greek and Arabic. This name usually has a lowercase Greek letter beginning with alpha and the rest of the alphabet in descending order. In this way, you give it a bit of order of discovery just by reading the name. Behind the letter of the Greek alphabet, we find an abbreviation of the name of the constellation.

If we exhaust the Greek letters for the enumeration of the constellations, we use the Latin letters. This type of nomenclature it is known as that of Bayer. The smallest stars are made up of a name followed by the abbreviation known as Flamsteed. As there are numerous nomenclatures, a star can have different names throughout the world.

Not only can we find the same stars with different names, but the groups of stars that make up the constellations are also called different.

In ancient times, the constellations were of great utility to learn to navigate at night. Without GPS navigation or radars of any kind, navigation across the seas was subject to other kinds of "technologies." In this case, the constellations served as a reference to indicate the orientation in which they were.

They also served to be able to account for the passage of the stations. Apart from the weather, the stations are not well defined. Therefore, with the movement of the constellations, it was possible to intuit the position that the Earth had with respect to the Sun in the Solar system and know what season of the year they were.

Currently, the only use of constellations is to more easily memorize the position of the stars. We must bear in mind that we can see millions of stars in the sky and that, as the minutes and hours pass, they move due to the movement of the Earth's rotation.

In total we find 88 groupings of stars in our celestial sphere. Each of them takes a different figure with a name, be it religious or mythological. The oldest constellation drawings are dated before 4.000 BC. At that time, the Sumerians named important constellations such as Aquarius, in honor of their god. 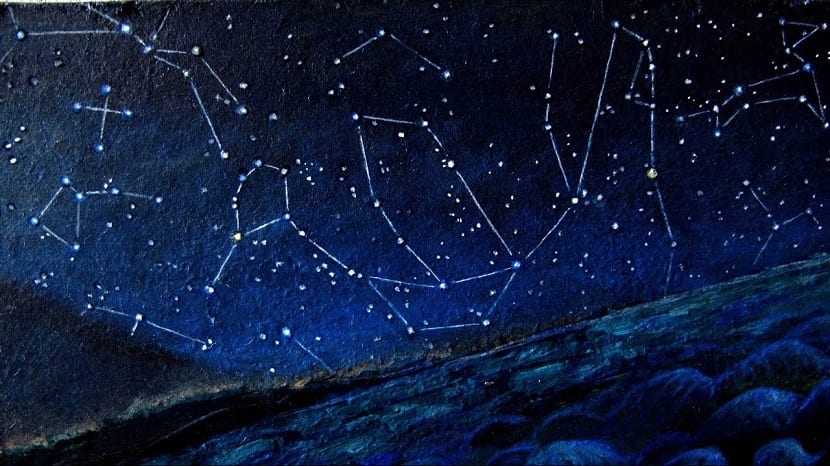 Among the most important and known are those that are in the plane of the Earth's orbit. They are the constellations of the zodiac. They are related to the zodiac signs of each person. This has to do with the month of birth of each one throughout the year.

There are also others better known such as the Big Dipper that can be seen from the northern hemisphere and Hydra. The latter is one of the largest constellations that exists in our celestial vault. It is a grouping of 68 stars that can be seen with the naked eye. Quite the opposite is Cruz del Sur, which is the constellation with the smallest existing size.

Here we are going to show you some of the most famous and easy to recognize constellations.

It is one of the most important and known. It serves to mark the north. The ancient navigators used it to mark the course towards unknown lands.

It is another constellation that can be observed only in the northern hemisphere. However, it was of great importance in ancient times for navigators since they could know the season of the year and the moment without even using any type of calendar.

It is one of the most famous and considered the most beautiful in heaven. It is also known by the name of hunter. It represents some cultures and it is sacred for the Egyptians to accompany them during the passing of the night-

It is one of the easiest to recognize in the sky by its M or W shape. It is used to identify some constellations when learning in this world.

I hope that with this information you can learn more about the constellations and their importance.